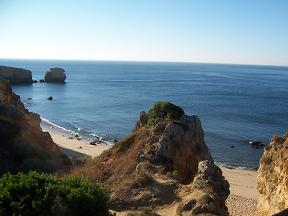 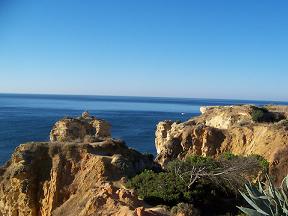 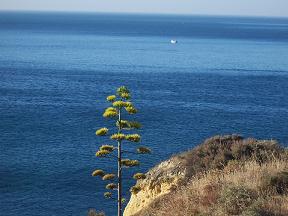 This is hard going cliff top walk, with several steep ascents and descents. On occasion you will pass close to the cliff edge and long drops! Please take care.

Walk towards the beach. At the new roundabout head up the hill to your right. You will pass alongside a wall. Follow the wall round and then just follow the cliffs. You will come to another low wall with a gap in it. Follow along the coast. You will come to a steep stepped descent to a stream bed, ascend the other side. Shortly you will pass alongside the wall and green screening of a villa, passing under some low trees. At the end of this bit be sure to turn left back towards the coast. You will see a villa on a headland. You will come to a steep descent opposite the villa. At the lowest point of the descent, and opposite a gate leading into the villa, there is a stepped path down to a tiny beach. There is a fantastic stone archway through which the sea races. Ascend once again and continue. The path passes very close the edge, overlooking a beautiful but inaccessible beach. Follow the path on. You will reach a point where there is a barrier making a headland inaccessible. There was a massive rock fall here some four years ago. A huge chunk of the cliff just fell into the sea. You can still continue though, by heading inland a bit and passing behind some bushes. This path is hard to find, but it is there! Follow the red path round and on along the cliffs. There is one more sharp descent and a very steep and slippery ascent, and then you are at Coelho or Rabbit beach. There is a restaurant and bar, but it may well be closed in the off season. You can walk along the beach here. A path ascends behind the cafe, up onto the cliffs again until you reach Castello, and its beach restaurant, which is bigger and more likely to be open. If you want to go beyond Castello and it is LOW TIDE, walk round the rocks to the smaller beach behind the restaurant and cliff the cliffs again. If it is HIGH TIDE it is much harder to continue. There is a path behind the restaurant but it comes to a VERY steep and slippery drop. Not really recommended. Beyond Castello there are further beaches and eventually Gale, which has a big beach restaurant. You can return to Sao Rafael by the road, but this is a long walk after the cliffs. I recommend a long lunch first! 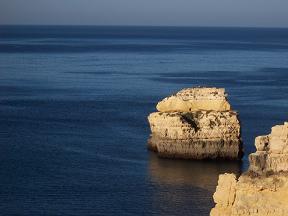 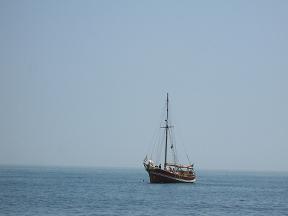 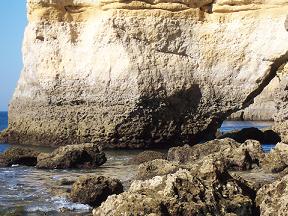